Scomis are currently undertaking a major technology refresh across the Hosted Applications platform. Following a successful pilot with a range of schools across our spectrum of customers, we are now undertaking the work necessary to make the updated Hosted platform available to all.

At present, the platform is running on Windows Server 2008 SP2 Application level servers which provide access to Schools SIMS data. This is causing some issues, for some customers, trying to access websites within the Hosted platform as the current browser is limited to Internet Explorer 9 which does not support technologies such as HTML5. This means some of the functions of web software like Schoolcomms, SIMS Options, Anycomms and School Pupil Tracker have not been available and customers have had to do work outside of the Hosted platform, which has caused some difficulties.

Windows Server 2008 SP2 is going to be End of Life (currently in extended support) on the 14/01/2020. The latest iteration of the Scomis Hosted platform is based on Windows Server 2016, which uses Internet Explorer 11, and Office 2016, which will ensure that the Hosted Applications platform is fully up to date and supportable from Microsoft for the foreseeable future.

The builtin, native Remote Desktop Printing Solution is much more robust within Windows Server 2016 so this will also allow Scomis to phase out the use of the third party printing solution currently in use (Screw Drivers). Initially we recommend that users do not remove Screw Drivers from their computers in case of any issues that necessitate reconnecting to the 2008 platform, where Screw Drivers is still needed.

To allow Scomis to switch users over to the latest version of the platform, we will be sending out an update to the Hosted Applications Connector this term. The current version of the connector is V5.42, after the upgrade it will be V6.XX. Once the Hosted apps connector has been updated, Scomis will then begin to migrate schools over to the updated platform, but initially schools will still connect to the current platform so will not notice any changes. It is anticipated that schools will start to be migrated over to the updated platform from the 29th of October 2018.

As with previous updates to the Connector this will be done in the background, via the builtin Autoupdate features so under normal circumstances there will not be anything that needs to be done to receive this update. However, the V6 Hosted Connector does require that the client computer has got Microsoft’s .Net Framework installed (version 4.0 or newer) to ensure that it works correctly. This can be downloaded directly from Microsoft here.

There are many improvements within the new Hosted Apps Connector and it will look a little different but still ultimately familiar. 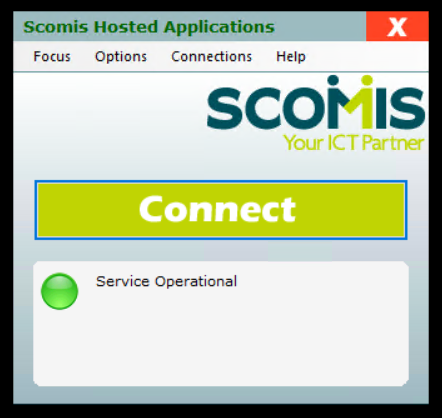 It will not be possible to connect to the updated 2016 platform, without first updating to the v6 Hosted Connector. See https://faq.scomis.org/kb22419/ for details.